Homepage and blog of Miles Jonathan Phillips, UK based architect

Site based on Lanyon, running on Jekyll

VCV rack - the wonderful absurdity of simulating analog signal processing using the power and speed of a modern computer. The joy is akin to playing the Zachtronics games TIS-100 or Shenzen/IO. Begin with the flexibility of a powerful all-purpose computing platform, overlay a veneer of simplicity and constraint, then allow open experiment. Complexity and texture and life start to emerge.

The Phonetics of Gregg Shorthand

I started getting into hand stenography after learning Plover. What I looked for in a writing system mirrored what I loved about machine steno:

Gregg shorthand met all of these, and more. The choice of curves and lines follows a host of predictable phonetic rules and (at least to me) seems to even echo the physiology of producing the respective sounds. See below for some of the basic phonetic symbols. The line shape mimics the tongue position and the length indicates voicing (short for unvoiced, long for voiced).

With the release of iOS 13 I have enjoyed exploring the tweaks and changes in some of the most frequently used interactions. The volume indicator is particularly delightful. It is grabbable, grows when grabbed, has an informative animated icon and haptic stops top and bottom. It also pops on to the screen perfectly aligned with the hardware volume buttons. It is as if the physical act of pressing the buttons pushes the virtual slider onto the screen. This is Apple’s famous hardware/software integration distilled into a tiny control. It may seem overkill, but I use this control hundreds of times per day, and now wonder how it could ever have been otherwise.

To begin, I need to begin. This post collects my first ideas of what this ‘blog’ will be and what it won’t. All of this is very likely to change. I plan to:

Tools used to make this site 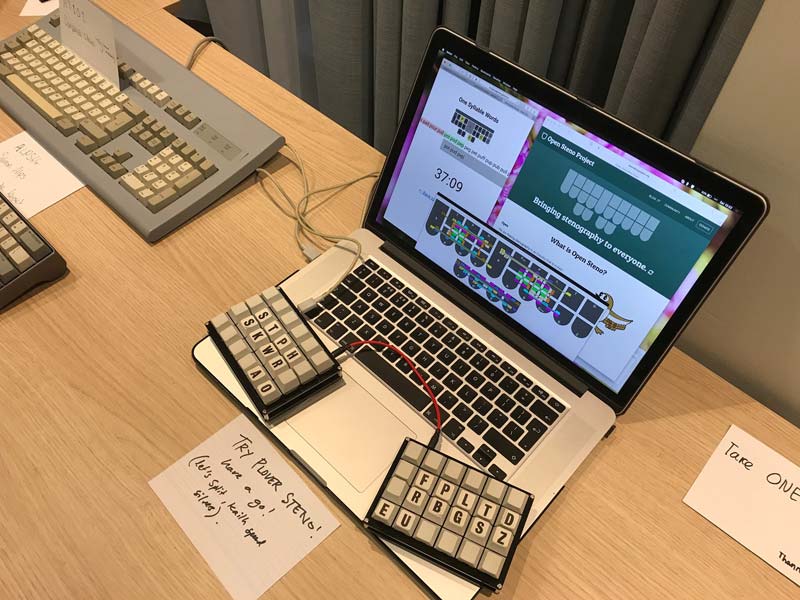 I am new to the world of stenography. As a designer, I do not often have to type large volumes of text, so might not be a typical user. However I was so impressed by some of Mirabai’s talks online that I decided to build myself a mechanical keyboard in order to learn steno as a hobby. Both learning steno and tinkering with keyboards turn out to be a lot of fun!

A large part of the appeal of mechanical keyboards has been the inventiveness of the devices and the spirit of the community, so when an opportunity arose to meet some of the community and bond over discussions of keycaps and switch stems, I jumped at it. The latest meetup of the MKUK subreddit was held on Saturday 24th February. I expected to enjoy looking at and tapping on many beautiful keyboards, but not display anything of my own. However while discussing the event on the Plover Discord Group, I came up with the idea of setting up a little Plover demo for people to try out at the meetup. As an enthusiastic beginner at stenography, I thought this would be a great way to spread the word about the open steno project and a good icebreaker at an event full of people I’d never met. 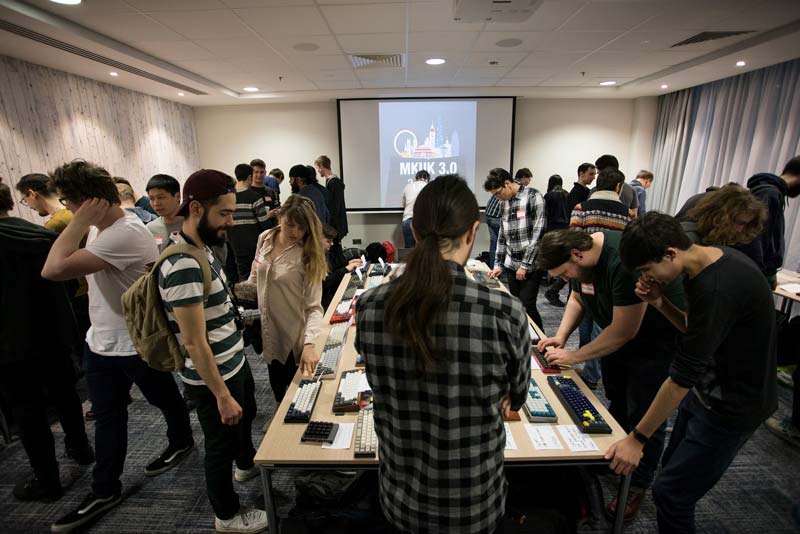 The venue was a basement meeting room in a Waterloo hotel, full of keyboards and enthusiasts. The event was buzzing and well attended, and I arrived in good time to get the laptop and keyboard set up and have a good browse around the room. There were also some generous giveaways throughout the session. 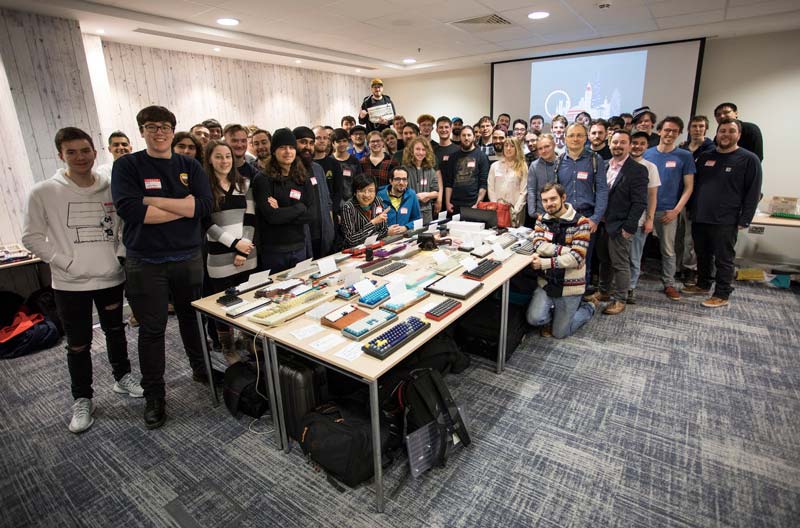 Although the idea was for my demo to be self explanatory, there was not quite enough information for a complete novice to try typing with any success, so I spent much of my time at the event standing by my laptop, talking people through the concepts of stenography and showing them how to stroke their first few words. Most had not tried stenography before, although I did meet one lapsed Plover user. The reception was even more enthusiastic than I had hoped, with a lot of interest, especially when I mention the potential typing speeds of 200+ wpm. 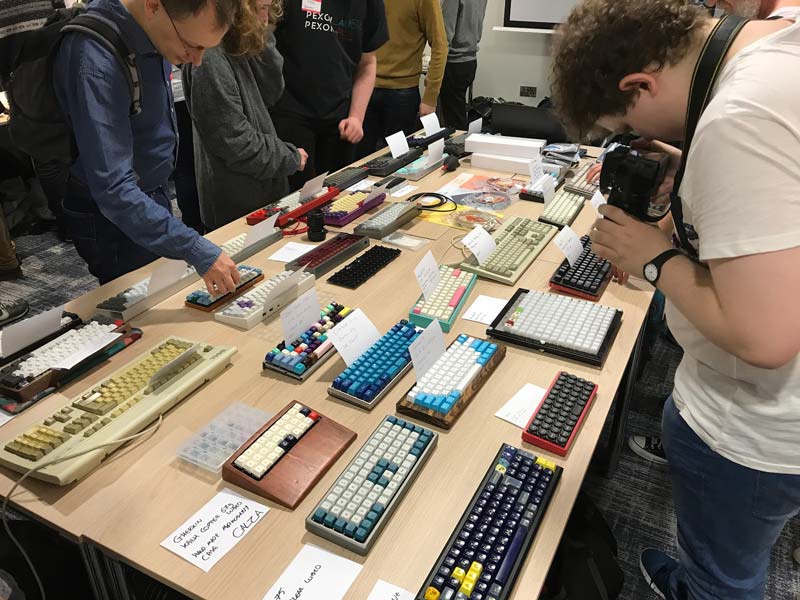 I answered many questions about my setup, Plover, and stenography in general, from

How would I type paraphernalia?

for which Plover’s ‘Lookup’ function came in very handy, to

is it very bound to the English language?

to which I answered “yes, but steno theories and keyboards exist for many languages!” (see the Plover Discord Group’s multilingual channel for more on this). One of the most interesting questions I got asked was

How did the first (pre-computer) steno machines work?

To answer I fired up the Plover ‘Paper Tape’ and explained that early machines recorded strokes on paper tape that would be later hand translated. Having these features to hand made Plover a joy to demonstrate, and I enjoyed chatting to everyone who took an interest.

I’ve detailed my setup below for anyone who is interested, along with some thoughts on improving it next time. I had a great time at the meetup, and would love to have a go at demonstrating Plover again in the future, especially if I manage to build up some fluency in stenography. Thanks to all the welcoming folk of r/MechanicalKeyboardsUK and to Mirabai for inviting me to write this post.

There are a few things I would do differently if I were to set up a Plover demo again. Hopefully this will be useful to anyone else who wants to demonstrate Plover in a similar context.

This post was written (mostly) using Plover at around 8wpm :)